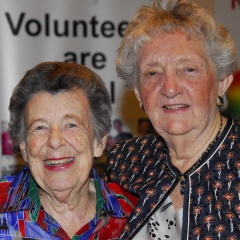 The pioneer organisation, the SA Volunteer Centre (later to be known as Volunteering SA) opened in Adelaide on 23 August 1982. The Centre was the brainchild of two dynamic women, Mavis Reynolds and Joy Noble (deceased) and initially staffed by volunteers. However with support from SA Council of Social Service (SACOSS) funds were made available through the Department of Community Welfare and the Co-op Building Society which saw a part-time co-ordinator employed.

With backgrounds in volunteering, Mavis and Joy both thought that a service which provided links to volunteers and organisations looking to take on volunteers would be beneficial. Some of their thinking was stimulated by a SACOSS study in which community organisations had expressed an ongoing need for volunteers and whose paid staff had requested help in making the best use of volunteers. It was a fortuitous meeting of minds and personalities, but what these two women shared was an absolute conviction that a Volunteer Centre which provided both a referral service and training in the use of volunteers would flourish in South Australia.

Careful placement of volunteers and follow-up would be key to their success along with the skills of the staff in the organisations which took on volunteers. From the very beginning, the Centre cast a wide net in its search for people with multiple skills who might become volunteers in a diversity of organisations which were registered - not only from the not-for-profit welfare sector but also those involved in sport, schools, museums, galleries and libraries.

In 1994 the SA Volunteer Centre was incorporated as Volunteering SA Inc and in 2007 changed its name to Volunteering SA&NT Inc. As the peak body representing the interests of volunteers and the volunteering sector in South Australia and the Northern Territory, it’s mission is to promote volunteering and play a key leadership role in advancing volunteering by providing an extensive range of services, support and resources for almost one million volunteers and all volunteer organisations.

We need to confirm your location to show you the most relevant content.